In this video, we will create an application load balancer in AWS using Terraform.

For the demo, we will create a Golang REST API and use Packer to build an AMI image. Packer build will also include a test suite to verify that our app is properly installed.

First of all, we need an application that we can use to create a demo with the application load balancer. I decided to build one instead of using one of the open-source demo apps for two reasons.

I chose to use Go lang for the app. We will use a Gin web framework to build a simple REST api. Let's import all necessary libraries. To create two http web servers, we would need an errgroup.

Next, let's create a getHostname handler for the /hostname endpoint. It returns the hostname reported by the kernel of the node where the app is running.

Then create another handler for the health check. Right now, it returns JSON with status ready, but in practice, it should check all the dependencies for the app, such as database connection.

Optionally you can have an endpoint to quickly check the status of the app. It can be exposed to the internet.

Now we need to create two routes. The first main router will provide /hostname and /ping endpoint on port 8080.

The job for the second router is to only serve the /health endpoint on port 8081.

In the main function, we need to initialize servers and associate them with corresponding routers. Then spin up goroutines for the main server and for the health server.

You can find go.mod and go.sum in my GitHub repository.

We will start with defining aws provider and setting up version constraints for the provider and terraform itself.

Then the VPC resource with CIDR range /16, which will give us around 65 thousand IP addresses.

To create all these networking components, initialize terraform and apply.

Now let's create a packer AMI image and install my-app. We're going to use this image in the terraform code to create EC2 instances in the first example and to create a launch template and auto scaling group in the second one.

Similar to terraform, we can explicitly require providers and set version constraints. In this case, we want an amazon provider equal to or higher than 1.1.4.

Next is the amazon-ebs Packer builder that is able to create Amazon AMIs backed by EBS volumes for use in EC2.

Then the build section.

Next, we need to create all those local files. Let's start with the systemd service definition.

Then the script to install our Go app. Typically you would have a CI pipeline that builds the source and produces the binary you can install on the EC2 instance. You don't need to install golang on ubuntu; it's just to simplify this process. You can use exactly the same script and install this app from my repo.

Optionally you can create a test suit for your AMI image.

To create tests, you can use ruby language and built-in functions to test different scenarios. For example, we can verify that the systemd file exists and that the service is installed and running.

We're ready to build the AMI image with Packer.

In the first example, we will create an application load balancer and manually register EC2 instances. This approach is common when you have a stateful application or maybe even a database where you don't want to use an auto-scaling group.

When you need to create multiple EC2 instances or any other resources, the best way is to use a map instead of a count variable. In that case, you can target individual instances, for example, if you need to scale one single EC2 or increase a disk size.

In this example, we have two instances of the app with instance type and subnet id to spread them between different availability zones.

Create one security group for the EC2 instances and the second one for the application load balancer.

Next, firewall rules for the application load balancer.

Now we can create EC2 instances.

The application load balancer uses the target group to distribute traffic to your application instances.

To manually register EC2 instances to the target group, you need to iterate over each virtual machine and attach it to the group using the traffic 8080 port.

Now the load balancer itself. There are two schemas available to you in AWS.

Each load balancer needs a listener to accept incoming requests.

We are ready to create the first load balancer. Head over to the terminal and apply terraform.

You can get the hostname of the load balancer and use it to test the app. First, let's try the /ping endpoint with curl. It should return {"message":"pong"} and 200 status code.

But if you try to hit the /health endpoint, you'll get 404 page not found because it is only accessible by the application load balancer.

In the second example, instead of manually registering EC2 instances, we will attach an application load balancer to the auto-scaling group. Based on the load, it can scale up or down the number of EC2 instances to handle the traffic.

For this example, we don't need a map with EC2 instances, but we need the same security groups. We can reuse security groups from example one, but to make it a self-contain example, let's quickly recreate them.

Then the same firewall rules for the EC2 security group.

Now for the application load balancer, we need to open an additional 443 port to handle HTTPS traffic.

Instead of creating EC2 instances, we need to define launch_template. The auto-scaling group will use it to spin up new VMs.

The target group and a health check are exactly the same.

The auto-scaling group will be responsible for creating and registering new EC2 instances with the load balancer.

To dynamically scale your auto-scaling group, you need to define a policy. In this example, we use CPU as a threshold. If the average CPU usage across all virtual machines exceeds 25%, add an additional EC2 instance. In production, you would set it closer to 80%.

Next is the same load balancer resource; the only difference for this load balancer is that we open an additional 443 port in the security group.

Now the listener, let's start with the same port 80. Sometimes you have a requirement to accept the HTTP requests on port 80 and redirect them to secured port 443. We will add that rule later.

Use the /ping endpoint to check the status of the Golang app.

If it fails, check if you have healthy targets in the target group. The same applies to the previous example. 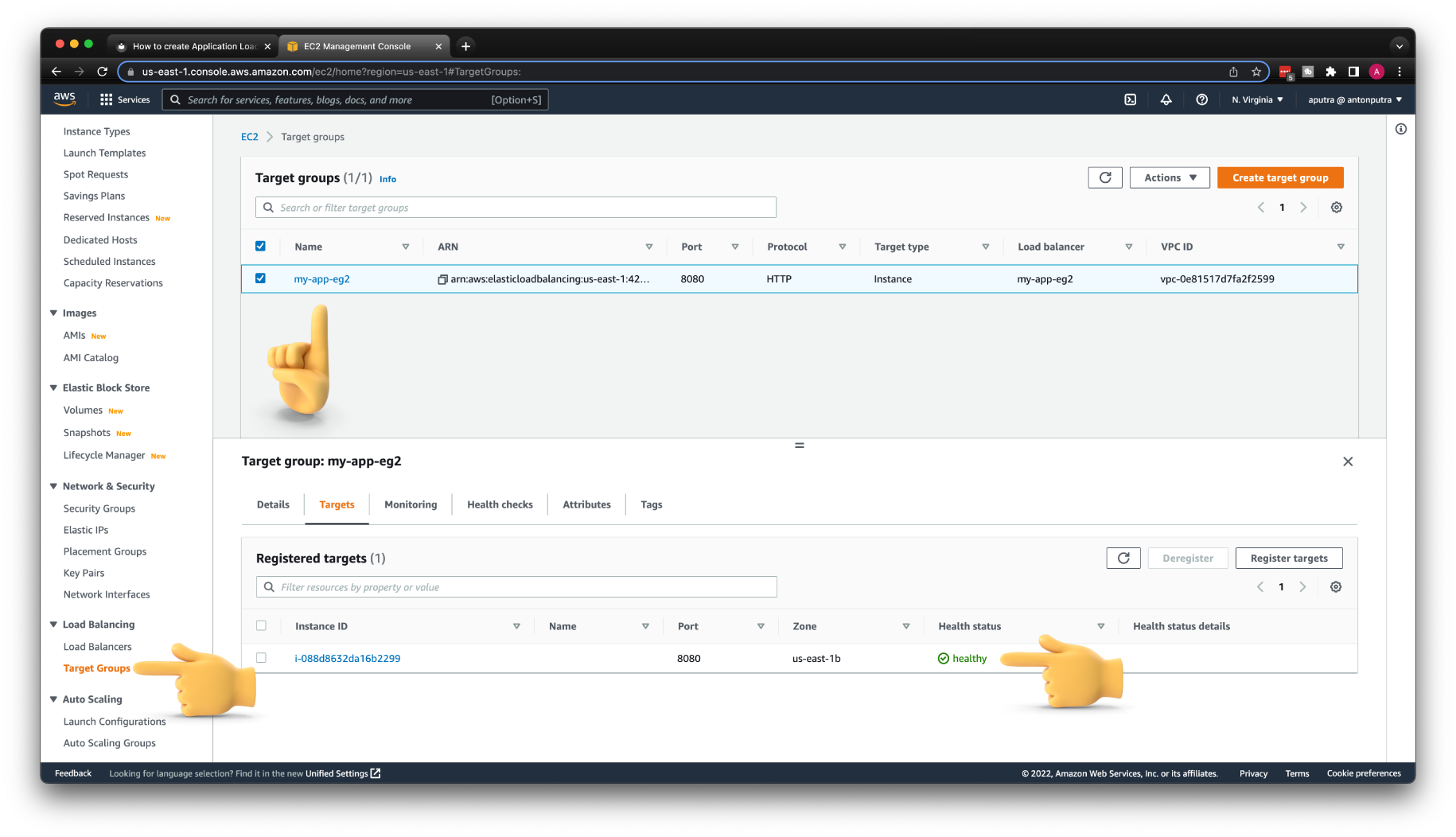 The next step is to secure your app with HTTPS. For that, we need to create a custom domain and obtain a certificate.

Since I already have Route53 hosted zone, instead of resource type, I can use data to get a reference. You need to replace the name with your hosted zone.

To get a TLS certificate, you can use the aws_acm_certificate resource and provide a fully qualified domain name. In my case, it's api.antonputra.com.

To prove that you own a domain, you need to create a TXT DNS record. In case we request a certificate for multiple domain names, let's iterate over all domains and create the necessary DNS records.

There is a special terraform aws_acm_certificate_validation resource that can wait till the TLS certificate is issued. It's optional, but sometimes other resources may depend on a valid certificate to proceed, such as API Gateway.

Create a DNS record for your load balancer. You can use CNAME or, in AWS, it is preferable to use ALIAS records. It can be directly resolved to the IP address, which improves the speed of DNS lookup.

We have a custom DNS record and a valid certificate; now, we can create an HTTPS listener on our load balancer. You need to specify the certificate_arn and optionally can adjust the ssl_policy to match your requirements for clients.

Then the same default_action that will forward requests to the same target group on port 8080. The application load balancer will terminate TLS and create a new TCP connection using the plain HTTP protocol to your EC2 instances.

Frequently we want to accept requests on port 80 but immediately redirect requests on secured port 443 and use HTTPS protocol.

Go back to terraform and run apply.

Test your app with HTTPS and a custom domain.

If you try to use HTTP, the load balancer will redirect and enforce HTTPS.